A Look Back at the Women’s Suffrage Movement 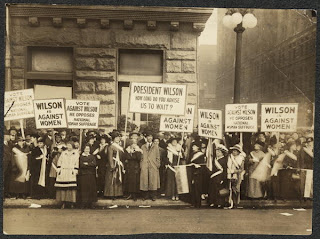 Today we celebrate Women’s Suffrage Day, because on August 26, 1920, the Susan B. Anthony Amendment became the 19th Amendment to the U.S. Constitution.

The passage of the 19th amendment ended a 70 year struggle that involved:

For decades, women would rally, march, protest, and even spend time in jail, for the right to have their voices heard and their votes counted. A handful of states did grant women the right to vote before the passage of the 19th amendment, but it wasn’t until 1916 that public sentiment began to shift in favor of women’s suffrage.

President Woodrow Wilson was reelected on a Democratic Party platform that supported women’s suffrage, but his inaction on the issue prompted suffragettes to picket the White House in the winter of 1916-17. After the U.S. entered World War I in April 1917, the administration’s attitude became increasingly intolerant toward the protests. When spectators assaulted the picketing suffragettes, the police did not interfere, and eventually arrested the suffragettes on charges of obstructing traffic.

This did little to stop the protests. Again, the police arrested several women who were sentenced to jail time. The imprisoned women conducted a hunger strike, saying it was the only protest left to them. After a couple of weeks, the prison doctors ordered the women to be force-fed. Newspapers printed sympathetic stories about the women’s jail terms and the forced feedings, and support for the cause grew.

Finally on January 9, 1918 President Wilson announced that he favored suffrage for women. The next day the House passed the Susan B. Anthony Amendment, and in August it became the 19th Amendment.