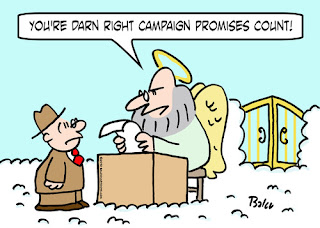 Now that all the presents have been unwrapped, are you a little sad that Santa didn’t leave you a gadget (or an app) that holds candidates to their campaign promises?

If so, you’re not alone. Many voters wonder if they have any recourse should they discover a candidate has misrepresented him or herself during the campaign. Can you force a newly elected politician to fulfill the declarations he or she made while campaigning for your vote?

The short answer is no; but in 1912, a voter in New York State tried after a candidate failed to fulfill his campaign obligations once elected. The voter reasoned that he had given his vote in exchange for oral promises made by the candidate, constituting a verbal contract. Thus, he brought a suit against the politician on the grounds of breach of oral contract.

However, the judge disagreed, ruling that “a contract cannot be based on an ante-election promise to voters generally by a candidate for public office, so as to give a voter a right to restrain the promiser from violating same.” Simply put, politicians are free to say what they like while chasing votes, and there is no legal recourse the electorate can take to force them to fulfill campaign pledges once in office.

But don’t be discouraged! While you can’t take your elected official to court over broken promises, that doesn’t mean you’re powerless. Voting is the best way to hold elected officials accountable. Make sure you’re registered. Besides voting, you can also call or write to your representatives and let them know you care about an issue. Don’t be afraid to craft a letter to the editor–it’s a simple way to let representatives (and your community) know that you care–and you might be surprised how many other voters agree with you.