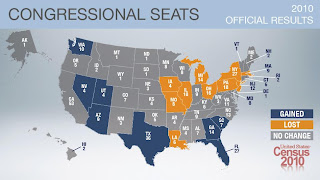 Earlier today, the Census Bureau announced the total U.S. population, each state’s population, and the new number of representatives each state will have in the 113th Congress. This map (also at the left) shows which states gained and lost seats based on the data. Here are a few highlights from the release:

When the first Census was conducted in 1790, each member of the House represented about 34,000 residents. Since then, the House has more than quadrupled in size, with each member now representing about 21 times as many constituents.

The Census Bureau will be distributing demographic data to states in February and March, which they will then use to redistrict based on population shifts and the new apportionment numbers.