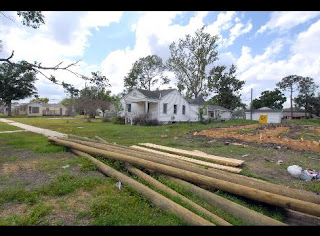 (Image- Bloomberg) NEW ORLEANS — Census forms will be hand-delivered in the city of New Orleans and surrounding areas affected by the 2005 hurricanes Katrina and Rita to get the most accurate count possible following concerns that the region could lose federal representation and funding.

The measures announced by U.S. Census Bureau Director Robert M. Groves on Tuesday did not go as far as those sought by Mayor Ray Nagin and some advocacy groups to locally count potentially thousands of former residents scattered across the country who are trying to come back.

By at least one estimate, 75 percent of New Orleans’ pre-Katrina population has returned in the nearly four years since the Aug. 29, 2005, storm and levee breaches. In some neighborhoods, there remain huge swaths of empty homes. Read more.