Do polling places affect your vote? 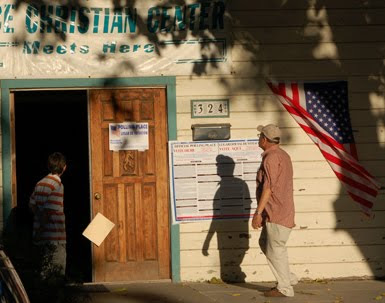 This new Tom Jacob’s article in Miller-McCune describes some fascinating studies on polling places, which show that polling place location (both in terms of physical proximity and type of facility) might affect not only voter turnout, but actual Election Day voting decisions.

On how physical proximity affects turnout:

On how the type of polling place facility affects the vote:

The article goes on to discuss whether “early voting” is the answer – that is, whether taking the polling place location and its possible effects out of the equation can produce less opportunities for last-minute bias while casting a ballot.

Whether or not early voting means less locational bias – and it’s unclear that this is the case -, the serious downfalls of mandatory and exclusive early voting systems (that such systems generally have no great effect on turnout, that they systematically exclude those without consistent permanent addresses, and that they diminish Election Day community excitement and celebration) hardly seem to make early voting an effective type of solution.

Read more about polling place effects, issues with early voting, and voter turnout in general in the rest of the Jacobs’ article here.