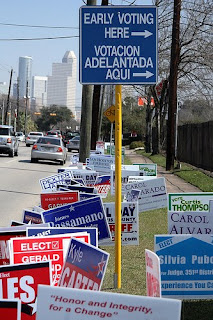 Interest and participation in early voting has dramatically increased in recent years: According to the U.S. Census Bureau, the percentage of voters who cast their ballot prior to Election Day increased from 20% in 2004 to 30% in 2008. These rates are in stark contrast to the 4% who voted early in 1972.

This year, First Lady Michelle Obama–always a trendsetter– led by example, casting her ballot on Thursday October 14 in Chicago.

Although Election Day is more than two weeks away, the United States Election Project is already compiling data on the number of ballots cast early this year.

As exciting as it may be to make predictions based on new data that is emerging daily, the Early Voting Information Center (EVIC) used their blog to caution readers (particularly the media) that the early voting numbers coming out are only a tiny percentage of the overall votes–and of early votes. EVIC points out that typically less than half of early votes are cast more than seven days prior to Election Day, and advised waiting “at least until Monday the 18th or better, Monday the 25th, before writing the inevitable early vote story.”

While it may be too early to draw conclusions from the data, it’s not too early (or late) to see if early voting is an option for you. Visit your state page to learn more.