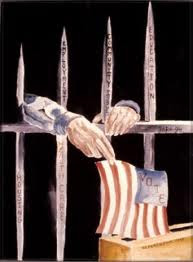 Felon disenfranchisement has received a lot of press this year, bringing the issue a bit of celebrity.

In January, a three-judge appellate panel applied the federal Voting Rights Act to Washington’s felon disenfranchisement law, overturning a state law that bars felons in prison and under community supervision from voting. However, in October a full sitting of the Ninth Circuit Court of Appeals reversed the ruling and upheld Washington’s ban against felon voting. In the process, the court rejected the claim that the constitutional ban discriminates against racial minorities and violates the Voting Rights Act. To challenge the ban, the court said that inmates would have to show that the criminal justice system is “infected by intentional discrimination or that the felon disenfranchisement law was enacted with such intent.”

In October, the U.S. Supreme Court declined to hear a legal challenge to the Massachusetts constitutional provision that denies convicted felons in prison the right to vote. The petitioners claimed that the law is racially discriminatory (and in violation of the Voting Rights Act) because blacks and Hispanics are imprisoned at disproportionate rates.

Despite the rulings, a New York Times editorial postured that “Their Debt is Paid.” The editorial also found that more than five million Americans were unable to vote in November because of what the author described as “unjust and archaic state laws that disenfranchise former offenders, even when they have gone on to live crime-free lives.”

However, there is hope as many states begin to revisit these laws. The Sentencing Project found that in the last 13 years, 23 states have given convicted felons increased voting rights, adding 800,000 former felons to voter rolls. Nine states have either repealed or amended mandates that permanently disenfranchised convicted felons, while eight have made the process to have an individual’s voting rights restored easier, and three states have given those on probation and parole the right to vote.

To learn more about the voting rights of felons in you state, visit our website and check out our fact sheet, available in English and Spanish. In the meantime what’s your take on felon voting rights? Should felons be allowed to vote while incarcerated (as is the case in Vermont and Maine), should full voting rights be restored automatically upon release, or should ex-felons have to finish their parole term first?