Harry Potter in Our World 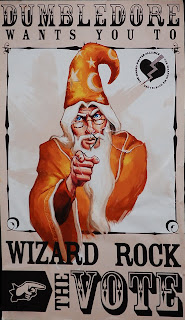 This past weekend, you probably saw long lines of avid Harry Potter fans waiting (perhaps in costume) to see the first installment of the seventh film. And while you and your children might know all about muggles, he-who-must-not-be-named, the Weasley family, and Dumbledore’s Army, you may not have heard of the Harry Potter Alliance (HPA).

The Harry Potter Alliance is a 501c3 nonprofit that promotes civic engagement “by using parallels from the Harry Potter books to educate and mobilize young people across the world toward issues of literacy, equality, and human rights.” The organization encourages youth to follow in the footsteps of their fictional heroes and work for a better world.

And while the organization is inspired by a fictional world, it is achieving real-world success. The HPA has raised $123,000 for supplies in Haiti, donated more than 55,000 books, and registered over 900 first time voters through the Wizard Rock the Vote campaign.

J.K. Rowling, author of the Harry Potter books, said herself, “We do not need magic to change the world, we carry all the power need inside ourselves already: we have the power to imagine better.”

The Harry Potter Alliance is another example of an innovative movement designed–and inspired by–young people, with a focus on civic engagement. While some may ignore the youth vote (or lament lackluster turnout), movements like this serve as a reminder not to underestimate the potential of today’s youth, in the voting booth and beyond.