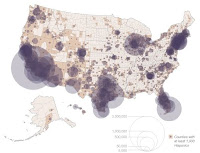 Timed well with the kickoff of the Census ground non-response followup, the Pew Hispanic Center has updated maps of the Latino/Hispanic population by county on its website. The maps show population numbers, shares and growth for 1980, 1990, 2000 and 2008, using population estimates and Decennial Census data from the U.S. Census Bureau. The county data for 1990, 2000 and 2008 also can be downloaded.

Clicking and dragging the sliders is a fun way to see the growth of the Latino/Hispanic population over the past 30 years.