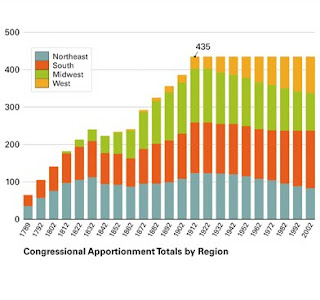 It’s not as doom and gloom as it sounds. Apportionment is simply the process by which we determine the number of seats each state has in the House of Representatives. With the Census set to announce state populations and the new apportionment numbers next week, now is the perfect time for a quick refresher.

But first, we should thank a few (thousand) people. Apportionment wouldn’t be possible without the decennial Census results, so thank you to 257,000 organizations–including countless nonprofits–that partnered with the Census Bureau to help spread the message about the importance of mailing back the Census questionnaire. As a result, 74% of households returned their Census form by mail this year, and twenty-two states met or exceeded their 2000 Census mail participation rate. The 2010 Census was the 23rd Census in our history.

As for apportionment, we’ll explain how it works with this two minute animated video, produced by the Census.

The Constitution originally set the number of representatives at 65 until the first Census was conducted in 1790, when membership was increase to 105. There are currently 435 seats in the House of Representatives, and each state is guaranteed at least one representative.

After the 2000 Census, Arizona, Florida, Georgia and Texas each gained two congressional seats. New York and Pennsylvania each lost two seats, but 32 states did not gain or lose a seat. To learn more about the allocation of seats over time, check out this interactive tool from the Census that displays apportionment and population data for the last 100 years.

Once the seats are apportioned, states will redraw their district lines to reflect population changes. The reapportioned Congress, based on 2010 Census data, will convene in 2013 for the 113th Congress.

For more information about apportionment, read this Census fact sheet and check back next week for the results!