Students Draw the Lines in Virginia 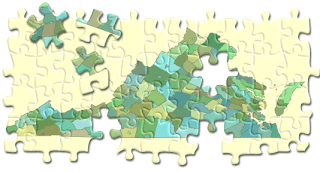 The 2011 Virginia College and University Legislative Redistricting Competition was recently announced, and will allow students to take a stab at redistricting their state. After Census data is made available, student teams will draw Virginia’s congressional and state legislative districts using software developed by the Public Mapping Project. (See our earlier post for more on this tool.)

Their redistricting plans will be judged on whether or not the districts are: compact; contiguous; equal in population; in compliance with the federal Voting Rights Act; encompass communities of interest, and; respect existing political subdivisions. In addition to educating students and the public about the redistricting process, sponsors also point out that the maps will “demonstrate alternative ways to draw Virginia’s districts, which may be compared favorably or unfavorably to the maps produced by the state government.”

And for the less studious, or those just looking to express themselves, the Sunlight Foundation has developed “Better Draw a District”, which allows you to draw over districts and “encourages you to add graffiti to any and all congressional districts.” (Note, this is a self-described “crude, far-from-serious, yet very fun” project.)

Both of these projects make it clear that this redistricting season will have something for everyone.