Voting in Germany. And then, voting in the United States. 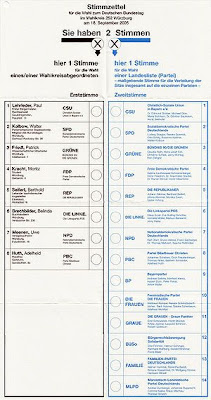 In honor of my sister Hilary, who is studying abroad in Berlin right now, here’s an interesting piece on how elections work in Germany.

In a nutshell, Germans have 2 votes.

The 2nd vote is cast for a “party list” (see the right side of the ballot) and determines the distribution of the remaining 299 seats to each of the various political parties.

An additional quantity of “overhang seats” are allotted in case any party receives more votes through the 1st direct election than it would normally receive through its allotted distribution of seats based on the 2nd party vote.

See the pie chart to the left for the breakdown of seats distributed in Sunday’s election.

Interesting tidbit- Germany’s government takes a much higher responsibility for registering its citizens to vote than the United States government does.

Germany uses existing civil registries at the municipal level (inclusion on these lists is mandatory) to automatically generate voter lists, according to this report from the Brennan Center. If a German will be 18 by the next election, they are automatically added to this voter list and receive a notification card in the mail.

By contrast, the United States- along with Belize and Burundi- places the burden on citizens to take responsibility for knowing the rules and registering themselves to vote.

Voter turnout is generally excellent in Germany, averaging in the past quarter century at around 80% – though in Sunday’s election, a “lackluster campaign” seems to have contributed to a decrease in voter turnout to 71%. However, compare this to US voter turnout, which in 2008’s extremely high-profile election amounted to just 62% of eligible voters.

Imagine how US turnout might be affected if we combined the high-profile races of our 2008 election with Germany’s near-universal voter registration (not to mention, their Sunday Election Day…).